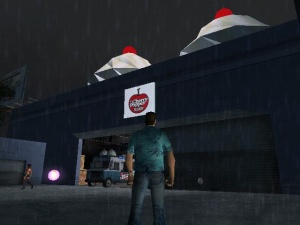 The Cherry Poppers Ice Cream Factory costs $20.000,= and after you purchase it, it will be marked on the map with this icon:

. The factory gives you the mission Distribution, which you can start by driving the Mr Whoopee After you completed this mission, Cherry Poppers generates an amount of money upon $3.000,= a day. The submission 'Distribution' keeps available after you completed it for the first time. The save-icon (

) will apear inside the factory, but pay attention: it is possible that your savegame becomes corrupted when you save your game at this factory. The reason for this, is that the game contains a bug at this point. It's, for this reason, hardly recommended to save your game somewhere else.