Grand Theft Auto: Vice City is the second GTA of the GTA III era. The game was released in October 2002 on the PlayStation 2. As the name suggests, the game is set in Vice City, a sunny and glamorous city in Florida where drugs have a major role in the criminal underworld. GTA Vice City offers more than its predecessor GTA III. Apart from the storyline and the known side missions, it is possible to buy safe houses and assets, compete in stadium events, drive motorcycles and fly helicopters. 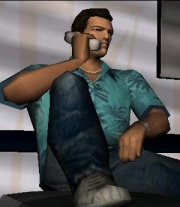 The year is 1986. You are Tommy Vercetti, you have spent fifteen years in the prison of Liberty City and you have never said anything about your Mafia family the Forelli's. You have been released from prison, and your former boss, Sonny Forelli, wonders whether he can control you. To be sure you won't cause any troubles in Liberty City, he sends you to Vice City, where you have to close a drugs deal. This deal is interrupted on orders of an unknown person, but you are one of the three men who survives the attack. With the help of Ken Rosenberg, a neurotic lawyer and Lance Vance, a slick dealer who just lost his brother, Tommy tries to find the one who messed up the deal to evade Sonny's anger for loosing the money. You'll meet various important and unimportant criminals in Vice City, who will help or try to stop you on the criminal ladder. Eventually, you'll find the one responsible for the attack on the drug deal, and from then you start to take over the underworld of the city by buying several companies and starting a criminal empire on your own.