Grand Theft Auto III was released in October 2001 on the PlayStation 2 and in May 2002 on the PC. The game is produced by DMA Design, which later changed its name in the -by now well known- Rockstar North. GTA III was a huge success. The game was set in a redesigned version of the first city of the original Grand Theft Auto: Liberty City. For the first time, GTA could be experienced in a Third Person View in stead of the traditional Top Down View. 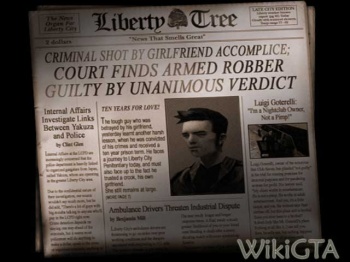 The story of GTA III starts in the middle of a bank robbery. The protagonist, Claude, leaves the bank, together with his girlfriend Catalina and a third person with the robbed money. On your way to the getaway car, however, you are betrayed by Catalina, who shoots you and leaves you for dead. You survive, but you are arrested and sentenced to a jail time of ten years.

Luckily, you're able to escape during the transport to prison, due to a coincidence. The Colombian Cartel attacks the convoy to free a elderly eastern man who is also in the convoy. The Colombians threaten the guards, and Claude and the third prisoner grab their chance. The prisoner smashes one guard knock out, and Claude kicks the other down and gets his keys to open your handcuffs. Then you see a bomb on the bridge, dropped by the Colombian Cartel. It explodes, devastating the Callahan Bridge and isolating Portland from the rest of the city.

The other prisoner introduces himself as 8 Ball, and tells you about a hide out to hide from the police. He has connections with the underworld of Liberty City, so he might know somebody who can use an errand boy. From then, you'll meet the criminal minds of the city who will give you a large amount of missions. Meanwhile, you try to find Catalina and get even with her.