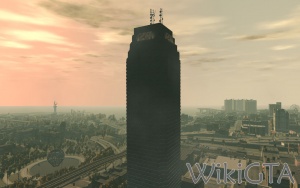 The LC24 Tower is a skycraper in East Island City, Dukes, Liberty City. The tower serves as an office for the LC24 newspaper, like the name suggests. It is the tallest building of East Liberty City and it consists of mere glass, showing modern architecture uses just the cheapest materials. The tower is based on One Court Square, also known was the Citicorp Building in Queens, New York City.

In The Ballad of Gay Tony the building is also used as one of the fifteen basejump locations.