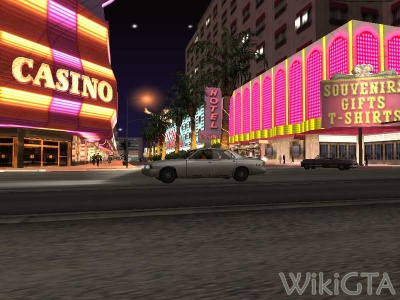 The Old Strip in Las Venturas

In Grand Theft Auto: San Andreas, Las Venturas is a city in the state of San Andreas. The city is based on the American city Las Vegas. Las Vegas has been named to the green meadow landscape ('Vega' in Spanish) of the territory. Las Venturas got its name of the Spanish word for 'Luck', what of course is very fitting for a city where chance game plays such important role.

The city has been founded in the 1940's by a gangster from Los Santos by building The Casino. Meanwile is the city growed to the largest gamble city of the world, including big hotels, neon lighting, wedding chapels and much more. Annual more than 40 million tourists from the whole world visits this sinful city, in search to the large money.

Las Venturas is naturally especially famous because of the large casinos along The Strip. Along these broad road are The Four Dragons Casino, Come-A-Lot, The Pink Swan, The Camel's Toe, The High Roller, Royal Casino, Pirates in Men's Pants, Caligula's Palace, The Visage, The Clown's Pocket and the Starfish Casino. On the northern end you'll find The Old Venturas Strip, where you'll find the older casinos and the V-Rock Hotel. The very first casino, The Casino, is been found however in Redsands.

In the north The Strip ends with a junction. The Emerald Isle is found between the two roads. On the east side of this district you find Roca Escalante, where you find a number of parking garages and the police station.

Above it, at the other side of the highway and the railroad line, a military fuel deposit called KACC Militairy Fuels is standing there. Next from it is to find the district Spiny Bed, a fairly cheap neighbourhood, but the district next to it, Prickle Pine, is on the other hand at the expensiver side. You'll find for example a bungalow complex and the Yellow Bell Golf Club.

Redsands is one of the largest districts of Las Venturas. The east side reaches The Strip, and the west side reaches almost Pilson Intersection. The Harry Gold Parkway is found straight below the district. Here lives especially young high trained employees of the city. Also you will find in this district the stadion of the baseball team Las Venturas Bandits. On the other side of the Julius Thruway is White Wood Estates to find, with below it Blackfield. Both districts becomes yet expanded, but because the districts lie so close against the highway, the houses are payable. In Blackfield is also the Blackfield Stadium to find, the bike school and the Blackfield Chapel.

On the other side of Las Venturas lies Creek, a district with single houses and a large shopping center. Completely at the bottom of the city you will ultimately find the district Rockshore with single houses, a business ground and some building grounds.

Las Venturas sees over an airport called Las Venturas Airport, to lead all tourists on and off, but the airport sees also over the LVA Freight Depot for the good transport. Next to the airport rises Las Venturas Hospital which is frequently visited by gamblers with debts after a heart attack. Other industry grounds are Randolph Industrial Estate and Linden Side. Las Venturas becomes for a large part of stream foresee by the Sherman Dam.

The infrastructures in Las Venturas is fairly particular. The Julius Thruway is a highway what completely circles Las Venturas. The highway has four reductions to the city, and a direct connection with The Strip. The other highway of Las Venturas, the Harry Gold Parkway, is found straight through the city, has two connections with the Julius Thruway, and leads in the south immediately to Los Santos.