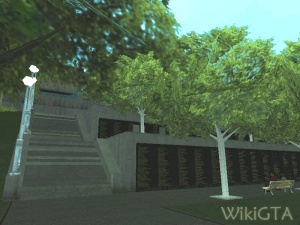 The Opposition Memorial is a memorial graveyard in San Fierro, near the Hippy Shopper.

The graveyard consists of three plateaus with no less than 72 graves in total. Plaques with all the honoured names are attached to the walls next to the two lower plateaus (although they are to small to read in the game). The memorial looks like a graveyard for war casualties, but if you look closely you'll see the text 'RIP Opposition 1997 - 2004' written on each gravestone, as if Rockstar Games wants to make clear competing games like Driver and True Crime do not stand a change. The birth and death years of 'Opposition' refer to the release of Grand Theft Auto in 1997 and GTA San Andreas in 2004.