Claude Speed is the protagonist of GTA2, as mentioned in the credits and manual of GTA2, as well as in GTA2: The Movie. It is possible Claude is based on this character.

Not much is known about Claude Speed as GTA2 lacks a storyline. Claude Speed is new in town and tries to make money by taking jobs from the various gangs in Anywhere, USA. His real name is not mentioned in-game and each gang boss refer to him with another nickname:

Claude has the code name 'Shaft' in the game's script. Also, note that the player can give his own name to the character when starting a game. 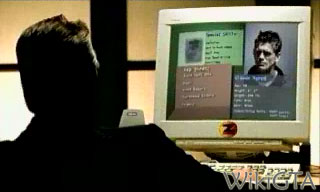 Claude Speed has a bigger role in GTA2: The Movie. This short live-action movie was made to promote GTA2 and was used to compile the intro of the game. Claude was played by Scott Maslen in the movie.

The movie shows how Claude Speed fulfils several jobs for the gangs. Claude is portrayed as a very agitated person who does not fear to use violence. Although voices cannot be heard, Claude does talk with others in contrast to his namesake Claude.

Claude Speed is shot two times in his back by a Zaibatsu hitman while he is trying to steal a car. It is unknown whether he survives and whether this should be considered canon. It is plausible the movie does not depict actual events of the story of GTA2, but merely shows the theme of the game. Note that the live action and in-game top down rendition of Claude Speed do not resemble each other.