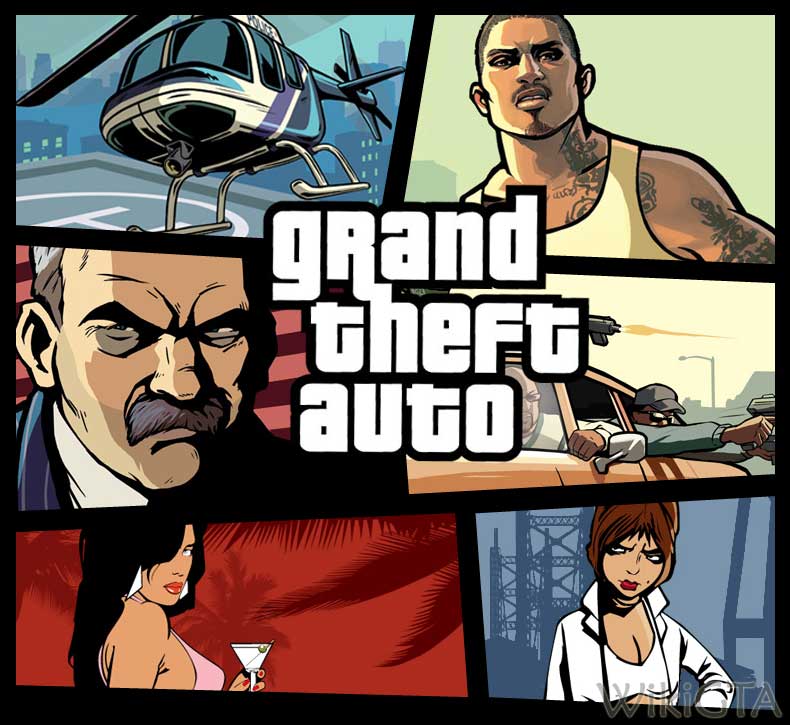 The game Grand Theft Auto (often shortened to 'GTA') was invented and designed by the company DMA Design (later renamed to Rockstar North). The first Grand Theft Auto - to which the whole series thanks its name - was released in 1997. Since then, another eight GTA's have been released, including two expansions of the first GTA.

GTA has always been a renewing game from the start. You don't play the 'hero' as usual, but instead you play the role of the criminal. You earn money and climb up the criminal ladder with crimes like road offences, assassinating other criminals and of course grand theft auto; stealing cars.

Another difference is the freedom GTA offered. The player isn't forced to follow a specified storyline, but is free to wander around town, explore unknown areas or just cause a enormous chaos on the streets all by himself. Besides, next to the missions, there is a large offer of extra small side missions like illegal car dealing, kill frenzies etc. But the main missions in GTA are for the most part fixed in a mission path and are practically the only way to finish the game or the level.

Otherwise, GTA is a series where many subjects are getting joked to. In every part you'll find parodies and references. Some examples are the Hare Krishna, religion in general, hippies, the pessimistic view of the future, complot theories, Elvis, the police etc. In GTA, Rockstar often makes a long nose (and sometimes a big finger) to discussions about those subjects.

Below, you can see a complete overview of releases and consoles. Go to the page "Release dates" for a comprehensive list of release dates.

The different parts are often subdivided in a few periods, or so-called 'era's'.

The series started with a Top Down View game and two expansions. These three GTA's are seen as the first of the three era's.

For its time, Grand Theft Auto was revolutionary. The fact that the game was all about committing crimes was new, just like the freedom the player had in the game. The concept of Grand Theft Auto was simple: The most important parts of the game were a simplistic city, a large quantity of different vehicles driving around that city and a criminal world that was shaped by missions. Outside the missions you could go where ever you wanted. Despite (and probably thanks to) the scandal the came created, Grand Theft Auto became an instant success.

GTA: London 1969 is an expansion to the first part and - like the name insinuates - is set in in London. The basic principle of the first GTA is still there, with the only difference that this is a real existing city. The typical British criminal atmosphere takes care of the same feeling in Grand Theft Auto. This part is the hardest to get at the moment, because there isn't a free download, like the other classics.

The GTA2 era contains only one GTA: GTA2. Still, this GTA is seen as an new era, because of the clear changes compared to the first GTA. The first GTA era and GTA2 are sometimes referred to as the 'classic GTA's'.

GTA2 has the same concept as the previous GTA's, but the game has changed in several ways, like better graphics and a more active world. GTA2 is - in contradiction to all other parts of the series - not set in a (persiflage of a) real city. Another new element in gameplay is the presence of gangs and the respect-system.

The GTA III era has been an enormous change in the Grand Theft Auto series. The most striking difference is of course the change to a Third Person View, in stead of a Top Down View, but for the first time GTA now gets a real storyline, real characters, other kinds of vehicles and new submissions. Apart from the PSP-GTA's this period doesn't contain multiplayer anymore. GTA III, GTA Vice City and GTA San Andreas are often being viewed as trilogy, because these GTA's take place in the three cities of Grand Theft Auto. Yet the other GTA's of this period take place in the same world.

GTA III is the first GTA with those big changes. However, the influences of the classic GTA's are still visible: GTA III takes place in Liberty City, the first city of Grand Theft Auto. Other than that GTA III still contains a Top Down View and a nameless main character without a script.

GTA Vice City takes place in Vice City, which is the third city of Grand Theft Auto, in stead of the second. The game is strongly inspired by the movies Scarface and Miami Vice. GTA now switches definitely to a Third Person View and the main character is now someone with a name and a worked out script. At the same time helicopters and motorbikes are added to the vehicles.

GTA Advance is a bit weird. The game was released for the Game Boy Advance only and uses the Top Down View again. It was supposed to be an extra port of GTA III, but it became a whole new story. The game is set in Liberty City that is adapted to a Top Down View and the limited possibilities of the GBA. Despite the fact that the story connects to the other parts of the GTA III era, many fans do not acknowledge the story as canon, probably due some chronological errors and the low popularity of GTA Advance.

GTA San Andreas is set in San Andreas and hereby completes the row of the original Grand Theft Auto cities. GTA San Andreas offers a large quantity of new items. San Andreas is much bigger than the cities of the previous GTA's and the game has more sidemissions and extra possibilities. The game contains more foul language and references to sex and even included small sexgames, although they aren't used in the final version of the game.

Grand Theft Auto IV will be released for the Xbox 360 and PlayStation 3 on October 16th, 2007. The game will mark the beginning of the GTA IV era, and the plot will not be connected to the previous era's. GTA IV will be, once again, set in Liberty City, although the city has been completely redesigned.

The world of GTA

All GTA's are connected in one way or another with another part of the series. Some relations are very clear, like a returning character like Claude, El Burro or Toni Cipriani, while other relations are just very subtle, like the presence of Grand Theft Auto and GTA2 in the internet café Tw@ in GTA III. Apart from the storyline of every GTA, there are also other things that are obviously part of the same 'world'. The connection between the Top Down View GTA's and the later GTA's are less clear and by that it's possible that these two era's should be seen as separate 'worlds'.

GTA never takes place in an existing city, but in a parody of an existing city, with notable exception of GTA London - which off course is a real city - and GTA2, where the name of the city is unknown. The most well-known cities of GTA are the cities of Grand Theft Auto, which are used again in the later versions. These are the cities: Liberty City (New York), Vice City (Miami) and San Andreas (San Francisco, and later San Fransisco, Las Vegas and Los Angeles). These spin-offs of real cities resemble the real features and atmosphere of the real cities, what causes every city to be very different from the others.