Darkel as he appears on the GTA III site

Darkel is one of the most mysterious characters of GTA III, as he can not be seen in the actual game. Darkel was removed before GTA III was released, but some evidence proves he existed. On the official GTA III website, you can see two screenshots of an unknown character in the Harbour Tunnel (the tunnel behind 8-Ball's bomb shop). The large screen can be seen on the right of this page, and the smaller one on the left. Also, you'll find 'Bill Fiore as Darkel' in the credits section of the GTA III manual.

It becomes clear that the name 'Darkel' and the two screens of the hobo belong to each other when you open the gta3.img file with an img-tool, and take a look at the files named Darkel.txd and Darkel.ddf. It is obvious this skin and model are the same as those in the screens on the website.

We will probably never know who Darkel was and what his role in the game was, although there are some rumours about Darkel. The fact that Darkel still can be found in the credits, the website and the game files, suggests that the character Darkel was cancelled at the very last moment. Rumours say he was supposed to be a terrorist who would give Rampage-like missions to create as much chaos as possible. It's not strange some people believe this concept was removed due to the terrorist attacks of 9-11, but you can wonder whether a complete character and his missions can be removed in less than a month prior to the release.

Perhaps Rockstar Games just didn't liked the concept in the end, and decided to use the kill frenzy-system again.

The fact that the .txd- and .dff-files are still present in the game files, makes it possible to see Darkel in the PC version of GTA III. By changing some data files you can change the appearance of a pedestrian to that of Darkel. Several mods have been made to put Darkel in-game, such as the mod at the bottom of this page. 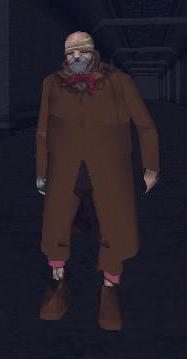 Darkel can not be seen in GTA III without modding the game, despite rumours he is used as a normal pedestrian. There is a hobo in the Harbour Tunnel who resembles Darkel slightly, but he is definitely not he same person.

Beside Darkel, an unknown character named Curtly has been removed form the game, too. It is unknown whether Darkel and Curtly are connected or not.