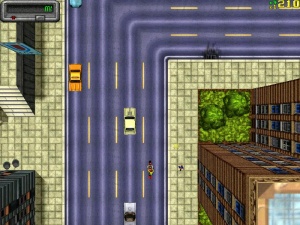 Grand Theft Auto has a Top Down View

A game with a Top Down View, also referred to as a Top Down Perspective or a birds eye view, is seen from above, making it impossible to see the horizon or the sky. The GTA series started with Grand Theft Auto, which had a top down view. This perspective was maintained in GTA London 1969 en -1961, en GTA2. GTA III was the first GTA with a 'normal' Third Person View, although the game still contains a top down view. GTA Vice City did not contain this perspective, but the series did not completely abandon the top down perspective, because it was reintroduced a last time with GTA Advance.

A common misunderstanding is that the older GTA's are 2 dimensional, but this is not the case. A top down view does not mean the game is 2D. The cities of the classic GTA's are completely 3D: You can go forward, to the side, but also up and down. The three dimensional city clearly can be seen when you open, for example, a GTA2 map in the GTA2 Map Editor, as you can see in the screenshot on the right.

3D image of a Wellard

The vehicles, pedestrians and objects in the top down GTA's are indeed flat images, and thus 2D. Still, the cars of GTA2 were made in 3D to produce a more realistic 2D image. You can see a 3D version of the Jefferson from GTA2 at the left.