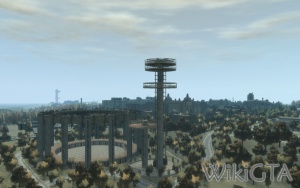 The Liberty State Pavillion Towers or Festival Towers are three huge towers in Meadows Park, Dukes, Liberty City. Like the Monoglobe, these towers are remains of a exhibitions in the Sixties. Both towers are accessible by two ladders: one set of ladders which is connected to all platforms on both towers, and one single ladder which directly leads to the most upper platform, making the last one the tallest ladder in the whole game. Both towers provide the player with a good overview of Dukes, Broker and Algonquin, optionally using one of the several binoculars. The Pavillion Towers are based on the New York Observation Towers, which can be found in Queens.

In The Ballad of Gay Tony a parachute can be found on the most upper platform.