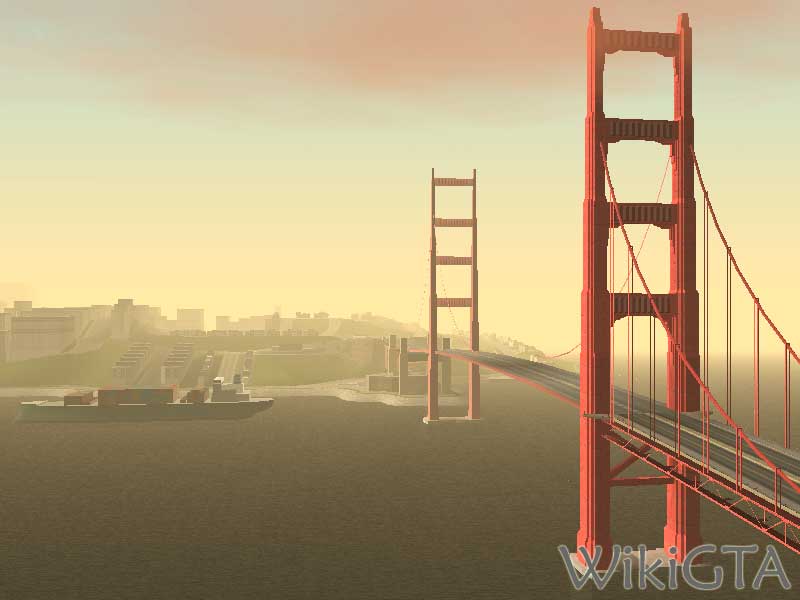 The Gant Bridge, seen from Bayside.

The Gant Bridge is the enormous red suspension bridge that spans across the San Fierro Bay, connecting San Fierro with Bayside. The bridge is the largest bridge in San Andreas and is a famous landmark of San Fierro. You'll find images of the bridge above the entrance to Easter Bay Airport and in the logo of SF-UR. The Gant Bridge is a toll bridge, with a toll-house is located at the southern entrance to the bridge.

The bridge is, like most other bridges in San Andreas, closed for a brief period in 1992. Scaffolding is placed on the San Fierro-end of the bridge in the same year. This could be the result of the earthquake in San Fierro in 1988, as the geological fault lies directly beneath the bridge.

The bridge has been built over an old fort on Battery point, the Pleasure Domes. Carl Johnson uses the scaffolding to get on the roof and gain entrance to the fort.

The Bridge and it's surroundings contain several easter eggs. North in San Fierro is a museum about the Gant Bridge. There's a sign in front of the museum, which contains some interesting facts about the bridge. It learns us that the bridge is 159,7 meters long and that the road is suspended 60,3 meters above the water, but it also tells us the bridge contains 11 textures and is 1,27 megabyte. The museum also has an 'actual piece of cable' on display, with some humorous remarks.

On top of the south-east pillar you'll find a sign with the paradoxical text "There are no easter eggs up here. Go away."

No easter eggs up here!

The Gant Brigde is of course based on the famous Golden Gate Bridge in San Fransisco. The museum, the facts-sign and the piece of the cable have real-life counterparts, just as the Pleasure Domes, which is based on the Castillo de San Joaquin.