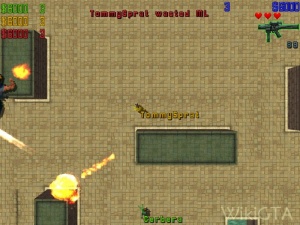 There are many unofficial levels available for GTA2. To play these mods, you'll have to download and install them. Luckily, installing GTA2 maps is simple. Always read the readme which is included with most mods, because the readme normally explains how a mod should be installed. The tutorial below can be useful if the readme is missing or unclear.

If you download a level, the files will be packed into a .zip- or .rar-file (as pictured left). Before you can install the mod, you first have to unpack the compressed file with a program like WinZip or WinRAR.

After you unpacked the file, several files will appear. How many and what sort of files may vary. Several different file-types are listed below.

The 'data'-folder. The files of the new multiplayer level 'are' have been selected.

The files of a standard singleplayer level could be:

It is important to make a back-up of the original 'test1.seq'-file before you install the mod. This file can be found in the folder ...\GTA2\data. Copy this file and paste it somewhere safe (in a newly created 'back-up'-folder, for example). This enables you to restore the original file when you want to remove the mod without re-installing the game.

After you've made a back-up, you can copy all files of the new level into the folder 'data'. You should only have to replace the 'test1.seq'-file, which is safe because you just made a back-up.

Some mods require you to replace more files. Make sure you back-up these files as well before replacing them.

The files of a standard multiplayer level with 2 to 6 players could be:

(Note that this example only has one .scr-file. Some mods have as much scripts as players)

To install the mod, you have to put all these files (except the readme) in the folder ...\GTA2\data. If you're installing a mod with only the file types in this list, you won't have to replace files. If you do have to replace files, the mod may use a name which is already in use by one of the original levels or another mod.

It's also possible the mod uses files which replace original files, like a .gxt- or a .sty-file. If you replace a file, make sure you created a back-up of the original file, so you can always undo these changes.

All players have to install the multiplayer level to play it. You can install a maximum of 99 .mmp-files: files that exceed this limit will be ignored by the game. This means that you, if all levels support 2 to 6 players, you can use 19 levels at once, although this amount may be higher because not all mods support up to 6 players. The GTA2 Game Hunter solves this problem: all your levels can be selected when setting up a game in the Game Hunter.