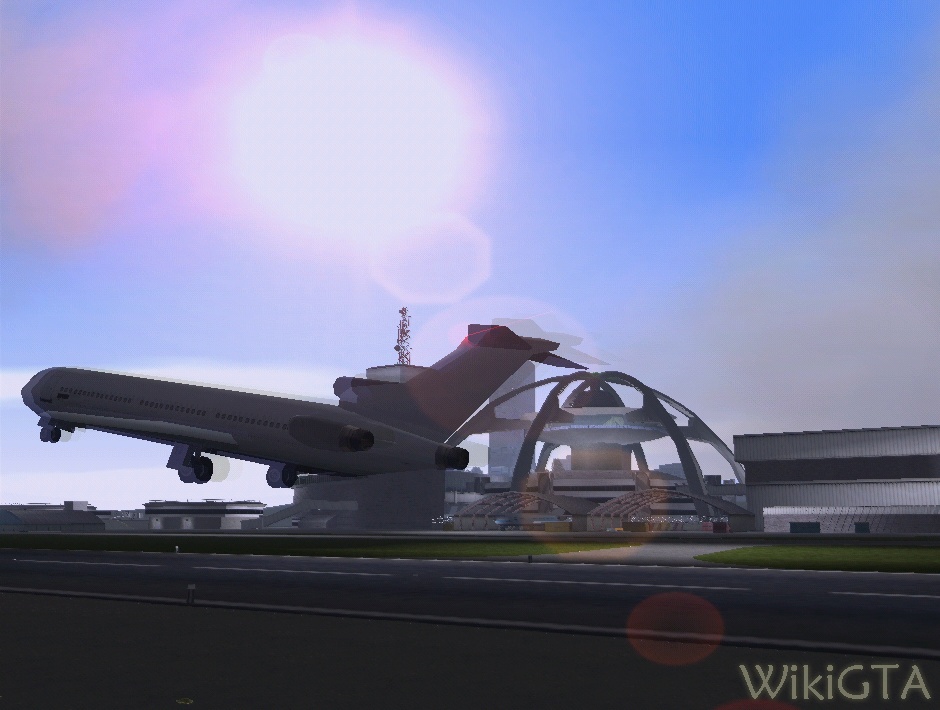 A plane arriving at Francis International in GTA III. The control tower and terminal are also visible in the background.

Francis International Airport is the airport of Liberty City in both the GTA III and GTA IV era.

In GTA III the airport is situated in Shoreside Vale, although it was supposed to be located on Staunton Island, as seen on early sketches of Liberty City. The airport has its own fire department and police department, two runways and a taxi lane. The control tower has its similarities with the tower of Los Santos International Airport, which is again based on the real tower of Los Angeles. Many planes depart and arrive at Francis International each day and several missions involve the airport, but it is especially known for its Dodo, the only (uncontrollable) plane of GTA III.

During GTA San Andreas we see the airport a few times. First it is seen during the opening scenes of GTA San Andreas, when Carl Johnson is about to check in at Francis International. The real interior actually consists of more than just the check in desk, as a front wall of the terminal is also present, though not completely finished. It is not unlikely that several scenes from outside the airport were planned. The luggage terminal and staircases are also unsolid. The interior is located close to the interior of Los Santos International Airport.

The airport of Liberty City in GTA IV is also named Francis International Airport and is located in Dukes. As it is the only airport in GTA IV, it is very advanced. For example, the airport includes a huge parking lot, an police office, and several special vehicles. These include the Airtug and Ripley, as well as taxis and police cars. Especially the police force is a big issue for Niko Bellic, as you are not allowed to visit the airport at any time during GTA IV. One step too close to the runways may result in a long police chase.

The airport has also a very important role in several multiplayer game modes. First of all, it is the location of Hangman's NOOSE, where you have to rescue Petrovic from his enemies, the NOOSE. During this game mode you can use the Airtug, or one of the helicopters available on the airport. These helicopters are Annihilators and spawn near the hangar in the north of Francis International. These Annihilators make the airport a frequently used location for fights in Freemode, as well as its big, flat surface.

Metro station Francis International Airport and the terminal in the background.

In GTA Chinatown Wars you will immediately find yourself on Francis International, during its first mission Yu Jian. Huang Lee will speak about his past in the air plane and when the plane touches the ground, several enemies show up and kidnap him. Of course you are free to visit the airport after this mission at any time. The airport is also the location of Fast Tracks, where you will have to drive a Rhino over the airport, shooting cars spread out over the runways. Instead of the Airtug, the Baggage Handler is included in Chinatown Wars. The airport also provides a location for the Liberty City Gun Club, a place where shooting is legal. Remarkably, entering the airport this time will not result in a high wanted level, probably because of these activities, or just because it's not so crowded this time.