Lazlow Jones (in the GTA universe simply Lazlow) is a radiohost on multiple GTA titles since GTA III. He is one of the few GTA-characters that play themselves. Lazlow is a radiohost in real life and has been on more than eighty radio stations. At this moment Lazlow is working fulltime for Rockstar Games. He has contributed to the sound of Manhunt 2 and Bully. He was also responsible for the radio stations in Grand Theft Auto IV.

In GTA III, Lazlow is hosting the talkshow Chatterbox FM. During this show he recieves calls from the weirdest Liberty City citizens, who talk about even weirder subjects. Lazlow also speaks briefly about him being fired at V-Rock, the radio station he was hosting in GTA Vice City.

In GTA Vice City, Lazlow hosts the radio station V-Rock. Next to his duty as DJ, he also recieves calls from some Vice City residents (the so-called V-Phones). During the programming Lazlow makes it clear he is anything but suitable as a rock DJ, and in GTA III, he is fired, as he states on Chatterbox FM.

In GTA San Andreas we hear Lazlow on the show 'Entertaining America' on WCTR.

In GTA Vice City Stories, Lazlow is the co-host of V-Rock, alongside Couzin Ed. 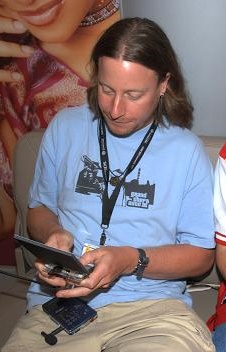 In Grand Theft Auto IV, Lazlow is responsible (alongside Dan Houser) for the radio and television stations. He also hosts his own radio station called Integrity 2.0 (unlocked after you complete Blow Your Cover).

In Grand Theft Auto V, Lazlow has worked himself up to a TV-host for the show Fame or Shame. If he's pleased with his new job is still the question, especially when he bumps into Trevor and Michael. He is also the co-host of Chattersphere, alongside Michelle Minx on the radio station WCTR.

Lazlow went to the Missouri School of Journalism. After his graduation, he wrote for magazines such as Playboy and High Times. He also made the radio item Technofile, which ran for 12 years and was broadcast on more than 100 American radio stations. In the radio item, that always ran for 1 minute, he spoke in a satiristic way about new technology. In the spring and winter of 2005, Lazlow had a one-time show called The Lazlow Show on the American XM sattelite radio station High Voltage. Nowadays, Lazlow makes The Lazlow Show a few times a year, broadcasted on the web.

Lazlow Jones is also a hackersympathist in his spare time. He is against branch-organizations, such as the MPAA (the Motion Picture Association of America). The MPAA controls a lot of home-media markets by applying region-locking and other DVD/Blu-Ray restrictions, which lead to certain regions not being able to play an imported DVD/Blu-Ray. Lazlow Jones gave a speech at the hacker conference Fifth HOPE about propaganda in media. In 2010, Lazlow gave a presentation about the death and future of traditional and new media at The Next HOPE.