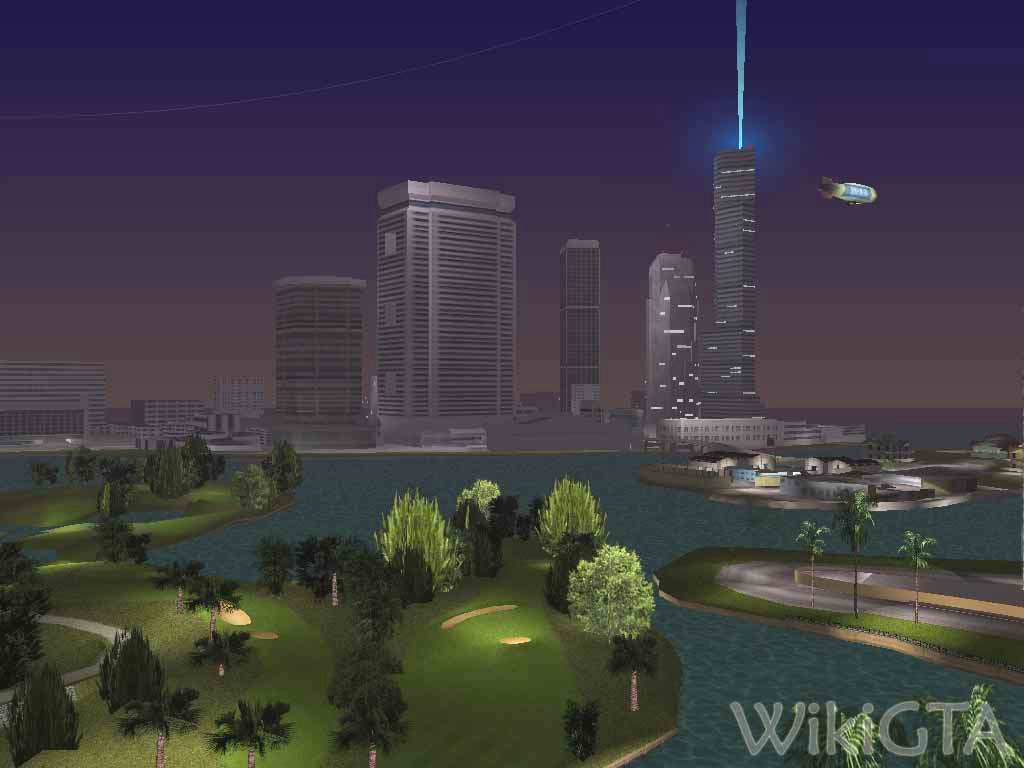 The skyline of downtown Vice City

Vice City is a city in the North American state Florida, based on Miami. The city has two renditions and features in three GTAs; the first GTA (as third and final city), Grand Theft Auto: Vice City and GTA Vice City Stories. Both renditions resemble their real life counterpart a lot. Vice City mimics the sunny atmosphere with beaches, palm trees and neon lights. The city suffers from (and thrives on) drug dealing, which is of great importance to the story lines of the GTA's set in Vice City. 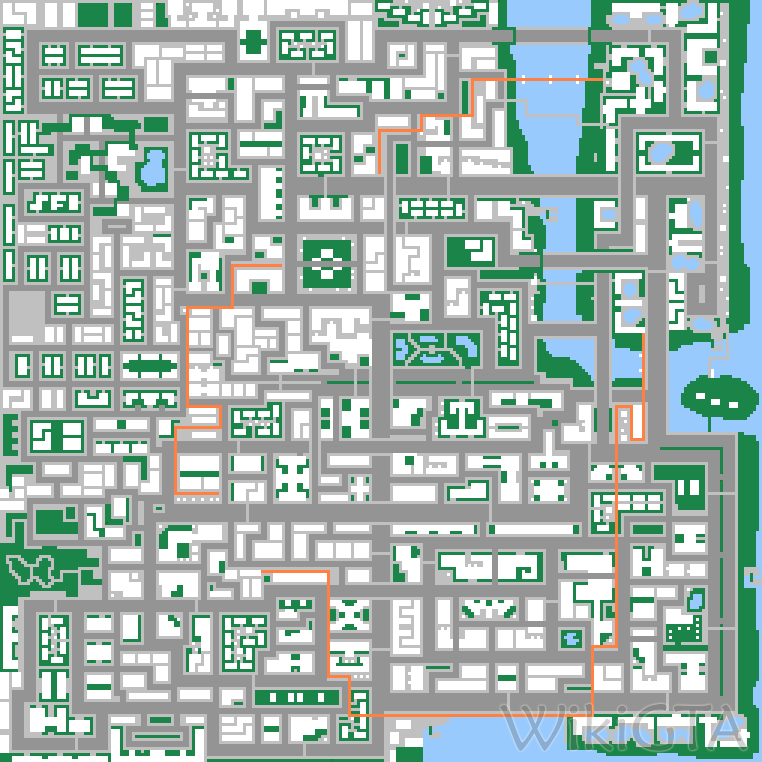 A former Spanish slaving colony, Vice City, or City of the Fallen Angel, holy mother of all and yet of nothing, to give it it's Spanish name, is a city that revolves around just one thing; money. From the retired doctors and lawyers of Vice Beach to the cocaine dealers of Little Bogota, everyone is desperate to show off just how much they can spend in this subtropical paradise. The down town area of Felicity is so-called to reflect the fortune early settlers felt at arriving at such a beautiful place. Modern-day visitors might feel slighlty-less fortunate if they take a wrong turning and stumble into the nastier corners of Little Dominica. More than anywhere else in America, Vice City is the archetypal 'melting pot', with large Caribbean, Colombian and European communities, always feuding with another, often with very violent consequences. The once-peaceful Rastafarian community has become a haven for Yardie criminals who found the going a little too hot in Kingston, and their clashes with the Colombian drug lords have given western Vice City an unenviable reputation. Initial attempts to control the troubles by the Police Department failed following revelations of wide spread corruption and drug trafficking within the force, and the problems have escalated in the last five years. Vice City now boasts the highest murder rates, the highest amounts of drug-related crime and the least respected police department of anywhere in the USA. Still, it's not all bad. As Mrs. Mary Clam, President of the Tourist Board, told us 'Vice City has a deservedly bad reputation as a very dangerous city, but as long as visitors stay out of the downtown area, only go out in daylight hours and never leave their car, they stand a very good chance of survival. Besides, we serve the best tacos in the south-east, and there's no denying the Vice City orange juice is the finest in the USA. As we say in these parts, our welcome may not always be friendly, but it's always warm. 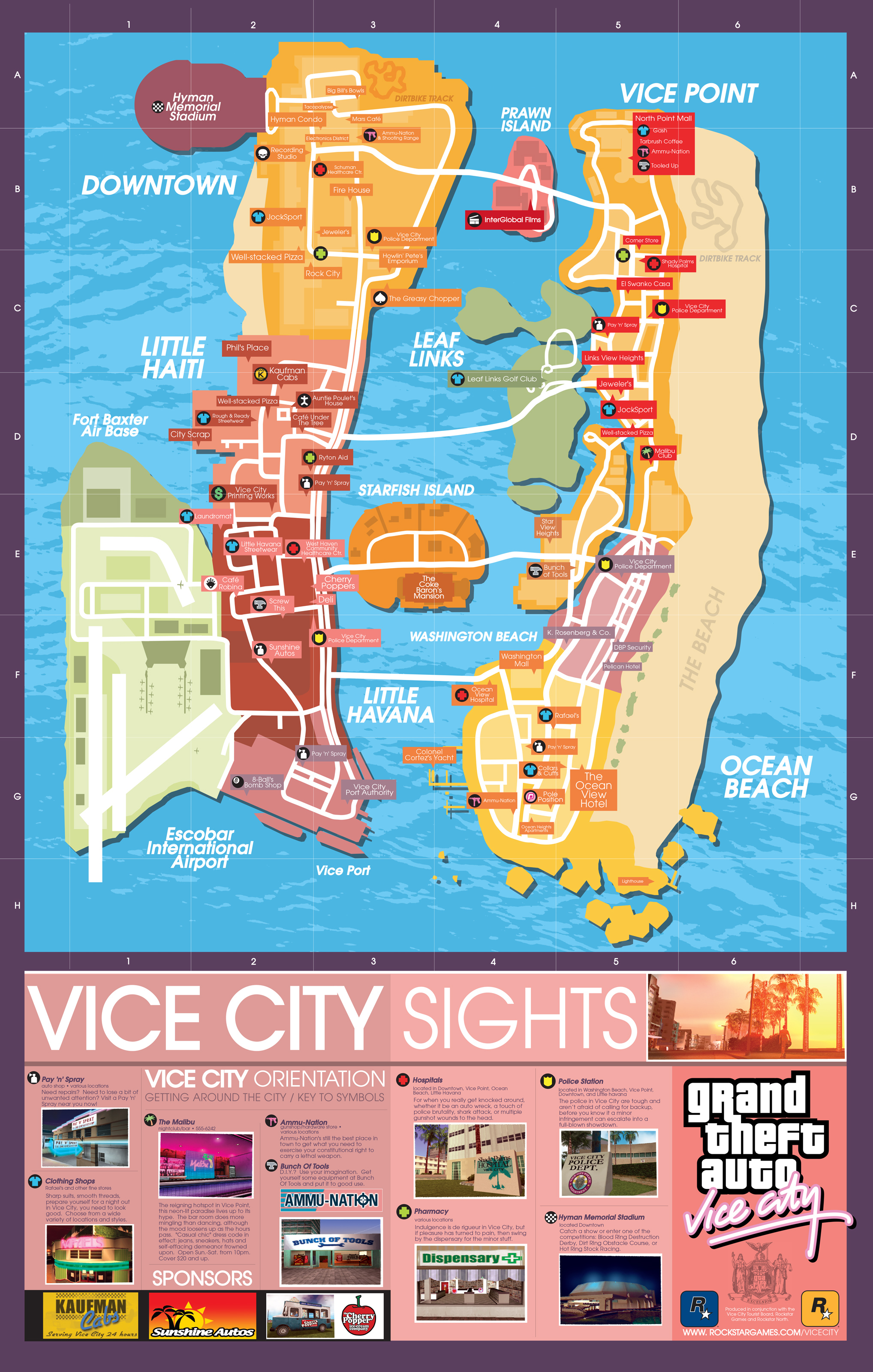 In GTA Vice City, we see Vice City for the first time in First Person View rather than a Top Down View. The city has been redesigned for the new GTA era, although the atmosphere stays the same. The city's tourism and drug dealing begins to flourish in GTA Vice City Stories and reaches its peak two years later, in 1986.

The city is divided in two main islands and several smaller islands. The two larger islands do not have a name (although names are indicated on the road signs) and are mostly referred to as the Western and Eastern island. They're also known as the 'first' and 'second' island, but because GTA Vice City and GTA Vice City Stories start on a different island, this may be confusing.

Ocean Beach - The Southern part of the island is called Ocean Beach. It contains the famous neon lit Ocean Drive, the promenade with numerous hotels. Several apartments, the Washington Mall (which, despite the name, is not located in Washington Beach), a light house and the Marina, where Cortez' yacht is docked and a hospital can be found here.

Vice Point - Vice Point is the Northern half of the Island. The largest and most recognisable building is the North Point Mall (also known as the Vice Point Mall). In 1984, a small Fun Fair was located in Vice Point, but the area was sold to Avery Carrington, who turns it into a construction site. Several high hotels are located next to the beach, including the Chariot Hotel.

The whole island Leaf Links is used as a golf course for the upper class of the inhabitants of Vice City. You'll find groups of golf playing people and driving Caddies here. Straight across the island, a road leads to the bridge to the Western island.

The small island in the north of Vice City is called Prawn Island. This used to be a upper class neighbourhood like Starfish Island, but the villa's have been abandoned for unknown reasons and the island fell into disrepair. One of the villa's was owned by the Mendez Brothers in 1984, but two years later the three mansions are inhabited by the Street Gang. 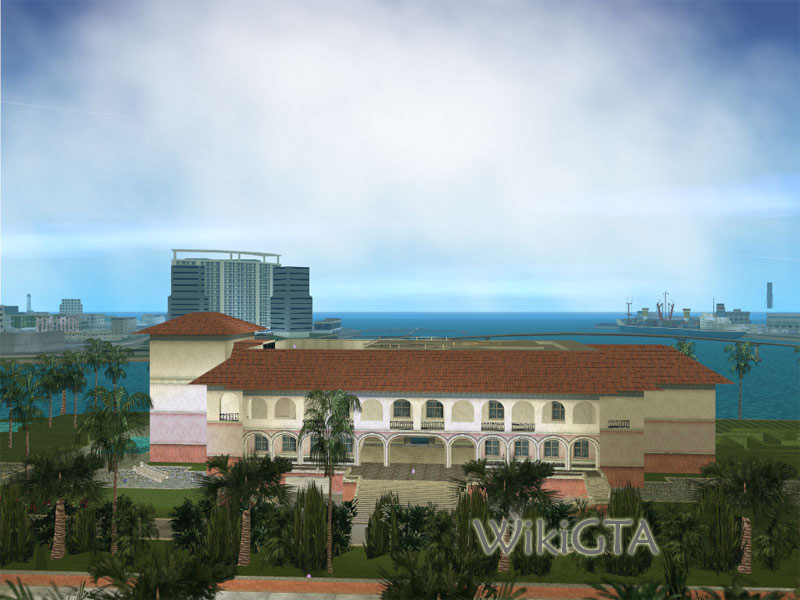 The Vercetti Estate on Starfish Island

Starfish Island is the most expensive neighbourhood of the city. Several large mansions with even larger gardens are located here. The Vercetti Estate, the former Diaz Estate, is the largest mansion on the island. As the name implies, it once belonged to Ricardo Diaz, until Tommy Vercetti killed him and took control of the house.

The Western island (also known as the Vice City mainland, although it is an island) consists of down town with the tall skyscrapers of the city, Escobar International Airport and Viceport. The poor neighbourhoods of Vice City are located between these areas. The ghetto's are divided in a Cuban and a Haitian area with a razor-sharp border. The island is connected with the Eastern island with several bridges.

Downtown - The commercial district of Vice City with several tall skyscrapers, the enormous Hyman Memorial Stadium, the VCN Building and the Biker club 'The Greasy Chopper'

Little Haiti - Little Haiti is Cholos turf until the year 1984. It then becomes the home of the Haitians. It is the poorest neighbourhood of the city and consists mainly of small houses and shacks. Romero's Butcher & Funeraria, the Junk Yard and Phil's Place are located here.

Little Havana - Little Havana is the other run down neighbourhood, although it is somewhat less poorer than Little Haiti. As the name implies, it is the turf of the Cubans. West in Little Havana, you will find El Banco Corrupto Grande and Cafe Robina in the East.

Viceport - Vice Port is the harbour of Vice City. A Chartered Libertine Lines ship docked in Vice City in 1986 was wrecked by Claude and [8 Ball]] in Liberty City in 2001.

Junk Yard - The Junk Yard, next to Little Haiti, is the scrap yard of Vice City. Lance Vance is kept hostage in the Junk Yard by Diaz' men in the mission 'Death Row.