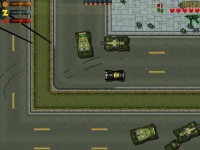 You can get a wanted level of one star/police-head by committing a relatively small crime, like driving into a police car or shooting your gun near an agent. Policemen will try to follow and stop you, but seldom shoot you. Normally only one police car at a time will pursue you. Losing this wanted level is easy: just stay a moment out of sight and do not commit any crime until the wanted level is gone.

When you keep committing crimes after receiving one star/police-head or when you commit a serious crime like killing an agent, you will get a wanted level 2. This time, several police cars will pursue you and shoot you when possible. The police will not give up easily now when they have lost your sight.

The SWAT or NOOSE will now assist the police. Members of this special brigade wear bullet free vests and are difficult to take down. Per four members, they drive in a little armoured bus. Starting from GTA Vice City the SWAT or NOOSE members will descend from the helicopter using ropes, so they can reach every spot. In GTA 2 you will get a dollar for each second you manage to keep off the police.

This is the highest level possible for Grand Theft Auto, GTA London, the GTA 2 Downtown District and Portland when the other islands are not available yet.

FBI, FIB or Special Agents will now come in action. The Special Agents in GTA 2 drive their own cars and replace the police and SWAT. They operate in teams of two agents and are armed with silenced machine guns and shotguns.

Since GTA III you have got the FBI that replaces the SWAT. Four FBI or FIB agents drive a black vehicle and carry body armour.

Wanted level 6 is the highest wanted level possible. You can only receive this wanted level after committing some serious crimes for a long time. Every police force leaves the street and is replaced by the army. The army uses vehicles like jeeps, APC’s and tanks. GTA 2 is the only GTA where the tanks will actually shoot at you.

The army is not present anymore since GTA IV. Compared to wanted level 5, there only come more heavily armed officers.

There are several ways to decrease or lose your wanted level. Some of them are:

For GTA IV and its expansions, the wanted level system was drastically changed. It is enough that there is one witness to your crime to actually get a wanted level. When you get one, a red and blue circle will appear on the radar which radius will grow when you get a higher wanted level. If you manage to escape the circle without being seen, the stars will begin to flicker and eventually disappear if you stay out of sight and do not commit any crime. But if a police officer sees you, the middle of the circle will relocate to where you are. On the radar an agent will be shown by a red dot, a police car by a red dot with some stripes circling around it, a helicopter with helicopter wings. This could come in handy when you are shaking off the police, as well as taking many turns. Also the wanted stars are white when the police has you in sight and gray when not.

It is still possible to visit a spray shop, but it only works when you have not been noticed while entering.

Some friends can also help you losing your wanted level. After Blood Brothers you can call Francis McReary (if you let him live) to get rid of a wanted level, though at the end of the story you will lose this ability because of “illegal practices”. Kiki can also clear wanted levels up to 3 after you have unlocked her special ability.

GTA Chinatown Wars has an unique wanted level system, different from GTA IV. After you have received a wanted level, the radar will flicker red and blue, but the police cars near you will not be indicated.

To lose your wanted level, you have got to make the police cars collide. When a police car has crashed hard enough, a red cross will appear on it. You can also choose to drive into a car, but you can get a red cross as well if your car is fast enough. The more stars you have, the more cars you are going to let to crash in order to lose your wanted level. The number of crashed cars and working cars can be seen in the upper right corner. After there are no more cars left, you can not commit any crimes for some time, otherwise the wanted level will reappear.