Ken Rosenberg is a lawyer, and a bad one. He had a lot of difficulties during his study, because of his drugs addiction. His graduation he has most likely owed by bribery or forgery. Rosenberg is suspected for bribery or threaten of jury members, so he can win his cases. Because of all his problems, he has become very paranoid and he regular fears for his life.

Ken Rosenberg has contacts with the Forelli-family. Sonny Forelli gives him an assignment to take care of the drugsdeal from Tommy. He called Colonel Cortez for help, who is well connected in all kinds of illegal business in Vice City.

When they walked into an ambush during a deal, Tommy and Rosenberg share the same problems, and together they try to avoid the anger of Sonny Forelli. 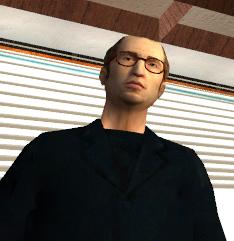 In Las Venturas CJ meets Ken Rosenberg. Rosenberg is still a nervous wreck. After some events in Vice City his life was better, but then he lost everything as a result of his addiction. He went to a drug rehabilitation centre and got rid of his addiction. He went to Las Venturas, where he is picked out by the Leone and Sindacco, as a neutral person. Because of the hopeless problems, he will again become addicted to drugs. With the help of CJ he can avoid Salvatore's anger and escapes with Kent Paul and Maccer to Los Santos. There he will become one of the producers of rapper Madd Dogg.