Kent Paul is a small time thug from the English town Kent. "Kent Paul" is one of his nicknames. He is also known as "KP" and "Paulo", but his real last name is unknown. He left his hometown Kent at the age of seventeen in 1982 and moved to Vice City where he tried to get in contact with the crime scene.

In 1986 Kent Paul becomes the producer of the scottish rock band Love Fist who is on tour in Vice City at the time. He also meets Tommy Vercetti, who needs his information several times although he doesn't respect him at all. 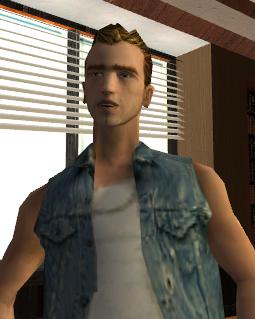 Kent Paul later returns to England, to the town of Salford where he meets the rapper Maccer. Kent Paul buys Maccers band "The Gurning Chimps" in 1992 and moves to San Andreas where they meet The Truth and ken Rosenberg. When Rosenberg has to escape from Salvatore Leone they join him and start working with the succesful rapper Madd Dogg.

In 2002 creates a website dedicated to the eighties. This website was used as a teasersite for GTA Vice City.