The GTA2 Script Compiler is an official DMA Design program which is used to convert *.mis files to usable *.scr files.

Script are usually made in normal word processors. To create a usable script, you need to save your script as a *.mis file. It's wise to give your script the same name as your map, so the example script will be called MapTEST.mis. Open the Script Compiler and load your script with File > Load. The compiler should look like this: 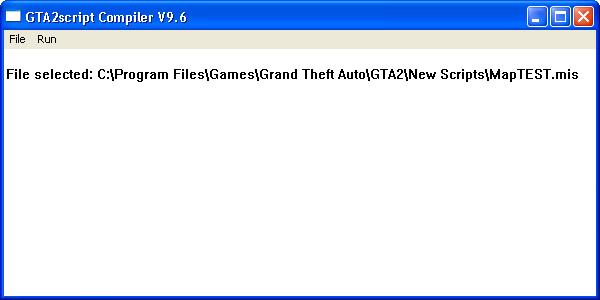 Go to Run > Parser and the compiler will immediately start compiling your script. Our example script only has three lines, so compiling it will take only a fraction of a second. When it's done, it should look like this: 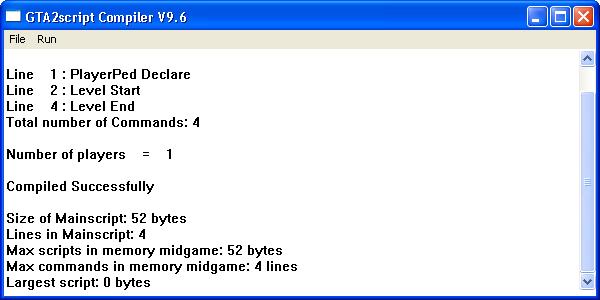 If there's a mistake in your code, the compiler can't compile your script and will give an error: 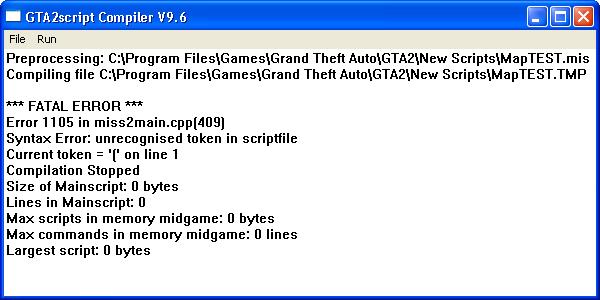 Most of the times there is a simple fault in your code, like a typo or a forgotten symbol. The compiler will show where it encountered an error (at "Current token") and what went wrong. In the example the compiler "encoutered an unrecognised token in scriptfile" near a "(" on the first line.

When the script is compiled, the new files will be in the same map as you *.mis file. Next to a *.scr file, there will also be a *.tmp file. This file isn't important. Note that Windows may recognise *.scr files as screen savers.

When you have the *.scr file, you can install it (see Putting a level ingame) and play your new level.