GTA Chinatown Wars is the first GTA game which gives you the opportunity to look into the drug dealing business, being able to buy and sell (but not use) them yourself. You will need them a few times in the storyline as a tribute for a certain client, as well.

There are 6 different kinds of drugs in Chinatown Wars. They are listed below.

The game offers two ways of stashing your drugs. Both ways are explained during the mission Tricks of the Triad. The safest way to keep your drugs is by stashing them in your safe house. When you do this, you will never lose these drugs, whether you are wasted or busted. In the red box (called stash box in game) you can stash an unlimited amount of drugs. The drugs can be accessed in any safe house. It is recommended to save your game after stashing some drugs, to make sure you still have them the next time you load the save file.

The second way to stash your drugs is in your bag. Since it is a bag, you will always have it with you, and you can buy and sell to your heart's content. You can only carry 50 drugs in your bag until you have completed both Excess Delivery submission. Be mindful to stash your drugs after visiting a couple of dealers, because you will lose all of your bag's contents when you are arrested. When you are wasted however, you will not lose any of the drugs you were carrying. It's best to stash all the drugs you bought, since every consecutive drug deal has a higher chance to attract police attention. This can be reduced by destroying the security cameras around the city. This also reduces the price of drugs you want to buy, which in turn generates more profit. Another positive side of immediately storing everything is that you have more space for the next few drug deals.

Ways to get drugs

There is quite a variety of ways to get drugs in GTA Chinatown Wars. The best known and most obvious way is learned during Tricks of the Triad. We mean drug dealing, with real dealers of course! Without a doubt, this is the easiest way to get drugs. These dealers can be found standing in alleys and other out-of-sight places, like a basketball court. When you approach a dealer, you will get the opportunity to take a look in his bag, and you can then choose which drugs you would like to buy. On the right of the type of drug, an arrow will indicate if you make profit, or a loss. Green indicates profit and red indicates loss. The same will happen when you open your own bag. Based on this information, pick which drugs you would like to buy or sell.

Every gang has a drug they sell in high quantities for a cheap price, and a type of drug they will love to buy, and offer a lot if money for it. Below is a list of every gang's most preferred drugs. 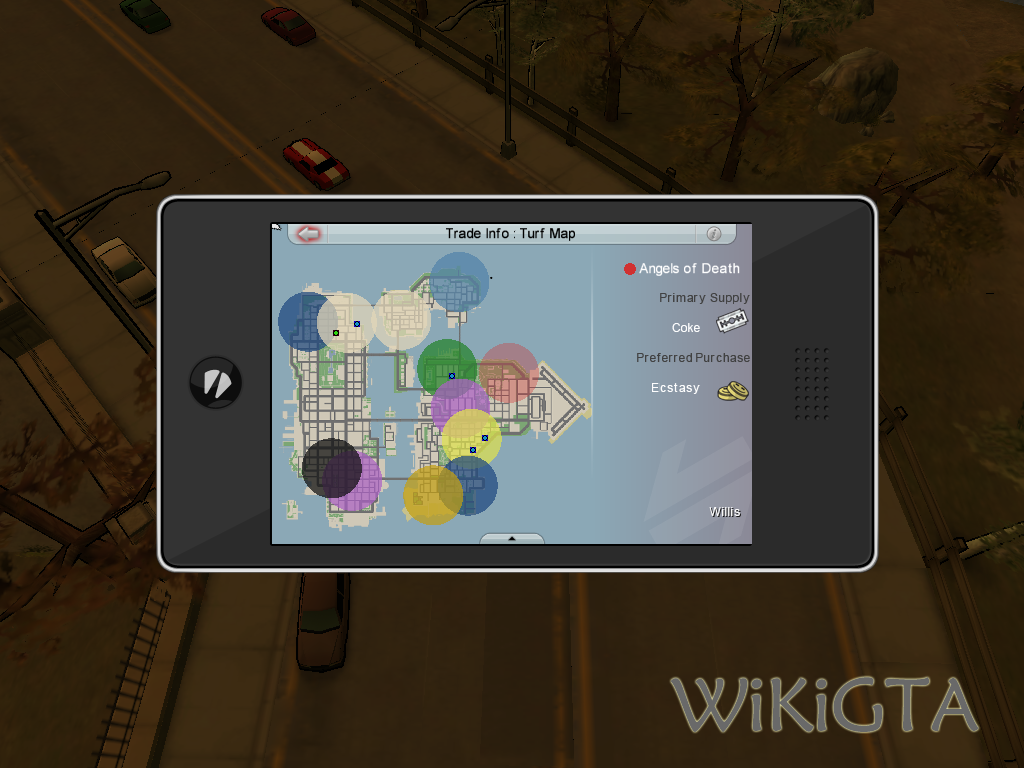 After completing Kenny Strikes Back, you will be able to start the challenge Warehouse Raid. This challenge provides a chance to raid the Spanish Lords warehouse again, and steal a Burrito with "goods". After stealing the van, you will be pursued by the Spanish Lords until you reach a safe location where you can cut open the left door, where, usually, drugs will be situated. This way, you receive drugs for free, and you will be able to sell them for a big profit!

After completing Carpe Dime, Huang will comment that raiding vans for their drug contents can be a lucrative side job. From this point on, you will occasionally see a van with a big red arrow above it. This indicates it is a drug transport, and that you can hijack it. The vans have various colors. These colors indicate which gang it belongs to. A green van with a ladder on top for example, belongs to the Irish Mob and will most likely carry a bag of acid.

At times, the door you cut open happens to have no contents whatsoever. The van was not carrying a drug shipment at the time you hijacked it. This means your effort has been for nothing, but you get to keep the Burrito!

You can also find...less appropriate items in the city dumpsters

In Under the Gun you will encounter dumpsters for the first time. Ling shows you how you can get some decent "goods" from these dumpsters. At the time, she had hidden a gun in it, but outside of the mission you will be able to find quite a variety of items in the dumpsters. You will most likely find weapons, a cutting-edge sword, or a package of drugs, but at times, you will also find trash, like rotting fishes, an old shoe, or a $10 bill, or more bad puns. Keep in mind you can only find real weaponry in the red dumpsters!

A couple of missions in the storyline will award you with drugs instead of money. These drugs can be sold for what can be considered a mission reward. The following few missions will award you drugs: 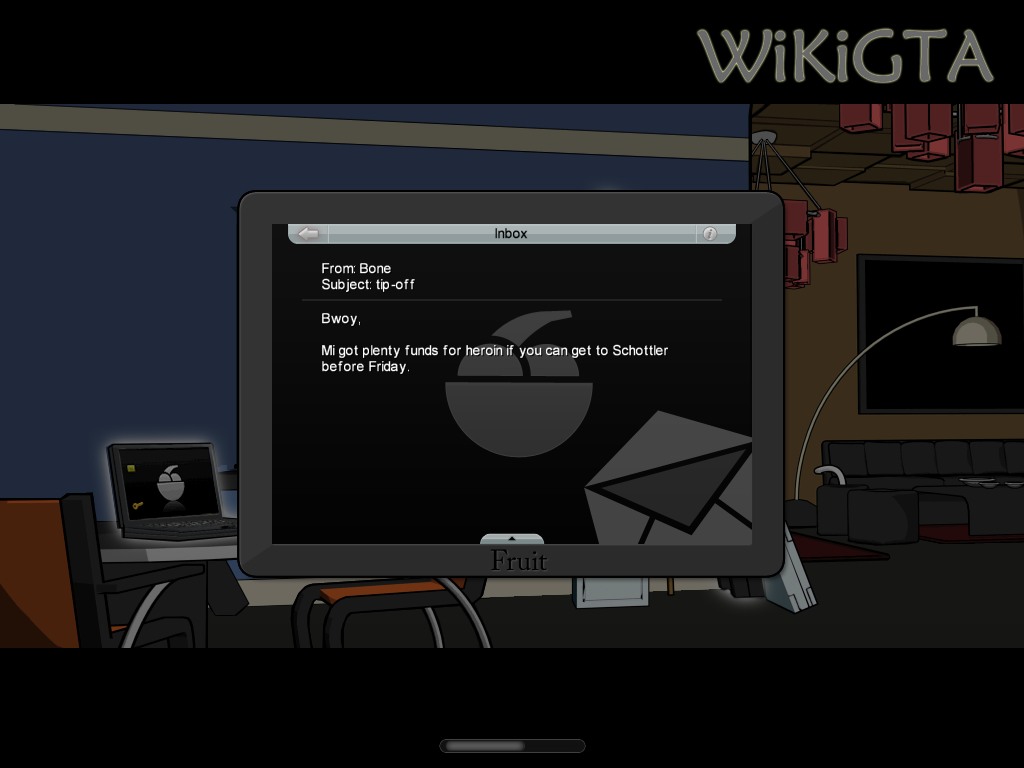 Dealers will occasionally send you an email with a special offer!

With a total of 80 drug dealers in Liberty City, the wheels will keep turning and sometimes they will have a shortage, or an excess amount of drugs. As you made name for yourself as a real Triad drug dealer, they will sometimes email you with special offers. These emails will be sent to your PDA and can be accessed at any time. When a dealer has an excess number of drugs in his possession, he will offer them for a very low price until a certain day. If a dealer is out of a certain type of drug, the dealer will buy that type of drug for a high amount of cash, until a certain day. The best way to raise your bank balance is to save cheaply bought drugs until another dealer would like to buy them for a high price. You can earn thousands of dollars in a single transaction!