First of all, we need a track. Each style file has a set of rail tiles which are "electrocuted", which means peds will die if they walk on them. You don't necessarily have to use these tiles to create the track, but it is the most logical. In wil.sty, the tiles are 226 and 332. The last one can be made flat.

Paste a stretch of track tiles to create the track. Mark them as "field" and add green arrows in the direction the trains should travel. In block type mode, the track should look like this:

Tracks have to be a complete circle, so we need to make corners. Corners are made in the same way as roads, but they have to be covered. GTA2 cannot depict rotating train cars. Also, make sure the train has enough room to rotate: there should be an empty ring of at least one block around each corner. S-turns, like the one shown below, are not possible.

Maybe you want to use elevated tracks, which means you need slopes in the track. Like with corners, GTA2 cannot depict descending and ascending trains, so sloping tracks should be covered. To make the slope as small as possible, it is best to use the steepest slope. If you want to raise the track more than one block, you should leave one level block between the two slopes. See the example below.

Each track needs at least one station (because trains start at a station). Make sure each train has enough room to stop at the station. The platform has to be long enough to support each passenger car at the very least. Passenger cars are two blocks long.

The tricky part of creating a subway is the placement of zones. Each station needs four different zones: A Railway Station(Platform), Railway Stop Point, Railway Station Entry Point en een Railway Exit Point. It is very important to position these zones correctly. One faulty zone can cause the whole subway to malfunction.

The Railway Station(Platform) creates the platform: the area where travvelers will wait for the train. The zone should be positioned directly next to the track (not on it!). It may not be more than 1 block wide, the length depends on the length of the station. The zone doesn't have to cover the whole platform: only the part you want pedestrians to wait.

The Railway Stop Point is a zone of 1 x 1 block and is placed on the exact location the train cab should stop. This zone should be placed so the passenger cars come to a halt next to the Railway Station(Platform) zone.

The Railway Station Entry Point is a zone of 1 x 1 block and is placed on the exact location the train should slow down before entering the station.

The Railway Station Exit Point is a zone of 1 x 1 block and is placed on the exact location the train should go to full speed after leaving the station.

Each zone needs an unique name. Use the next code: 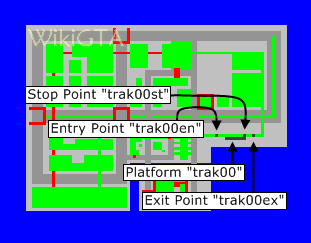 The four zones of the fourth station of the second track have the following names:

Trains are created in the script with the next command:

Every station where no trains start will need the next command:

Furthermore, it's important to block all tunnels with a TUNNEL_BLOCKER, to prevent anything but trains from getting into the tunnel.

These commands go before LEVELSTART