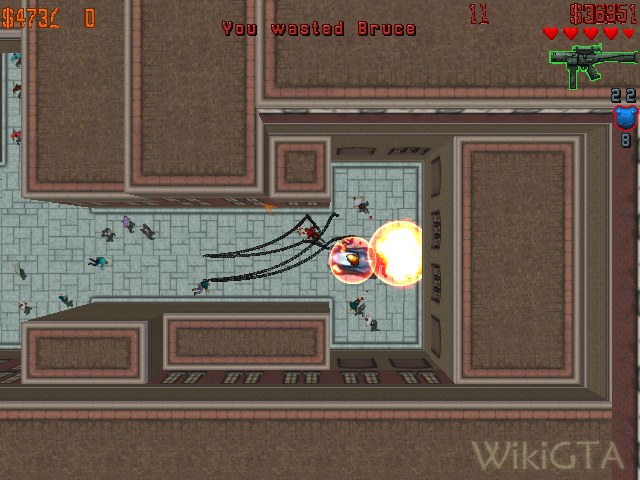 Two players with rocket launchers in a frag game in Tiny Town.

GTA2 was the last GTA with multiplayer until GTA Liberty City Stories was released. In multiplayer you play against other players on a netwerk or the Internet. The principal goal is to kill each other to gain the most points or frags.

There are three different modes. In each mode earning points is the same, but what makes you win the game differs.

The frag game is the basic game mode. The goal is to simply kill the most opponents. The player with the most 'frags' when the time runs out, or the player who reaches the frag limit first, wins the game. Each time you commit suicde (by being killed by the cops, for example), you will lose a frag.

A points game is almost identical to a frag game, but the winner is decided by points rather than frags. The player who has the most points when the time runs out, or the player who reaches the points limit first, wins the game. Killing opponents will give you lot of points (see above), but other things like the Elvis has left the building!-bonus are also very rewarding. Another difference between a points and a frag game is that points cannot be lost.

Tag game is a different form of game play. At the start of the game, the host is "it", which means he is designated as the target. His goal is to stay alive as long as possible, while all other players try to kill him. The target cannot use weapons or pick-ups and his car will slowly lose hit points. The player who manages to kill the target becomes the new target. If the target commits suicide, a new target will randomly picked. The player who has been the target for the longest time wins the game.

GTA2 can be played on a network or on the Internet. If you want to play on the Internet, all players have to forward port 47624 TCP/UDP and the port range 2300 - 2400 TCP/UDP. It may also be necessary to turn of firewalls.

The host of the game (the player who creates the game) has to set up the game and decide what the type of game, map, limits, etc. are. Usually, the player with the best connection is the host.

Start the GTA2 Manager and go to the tab "Network". You'll find four possible connection protocols. For most games, this is set to "Internet TCP/IP connection for Directplay". Beneath this setting, you'll find a box tagged "Protocol Connection". Every player fills in the IP address of the host here. With "show player names" you can toggle in-game names on and off. 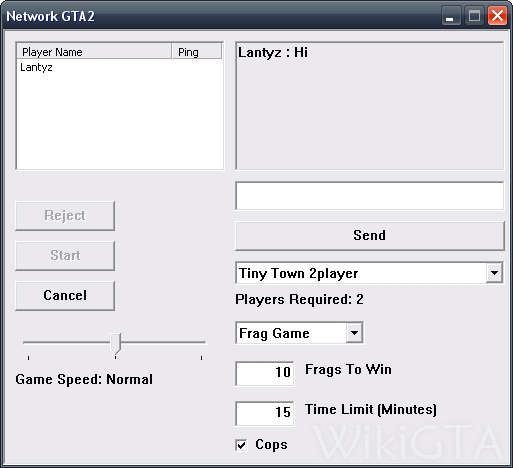 Multiplayer window as seen by the host.

To host a game, you have to go to the Network Manager by clicking the button "Start network game". A new window called "Network GTA2" will pop up. You can enter your (nick)name at the upper right corner. Click on "Create" to create a multiplayer game. The window will change into a window with several settings:

If someone else hosts the game and you want to join him, you have to go to the Network manager by clicking "Start network game". If the host is ready, the game will appear in the white box. Select the game and click "Join". You will enter a window in which all players are present. Players who join a game cannot change the settings: they can only chat with other players and leave the game.

A lot of players play by certain rules, so it is wise to discuss this before the game starts.