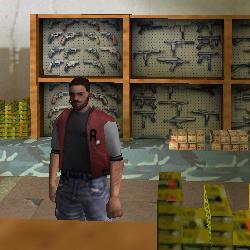 GTA Vice City has no less than 35 weapons, which is considerably more than the number of weapons in GTA III. The weapons are, for the first time in GTA, separated in ten different 'slots'. You can carry one weapon of each slot at a time, so if you pick up two weapons of the same slot, the second one will replace the first.

Like GTA III, weapons can be bought at Ammu-Nation. The weapon dealer has stores in Ocean Beach, Vice Point and Downtown. You can also buy tools as weapons at the hardware stores in Vice Port, Vice Point and Little Havana.